Tuesday 21st June was a significant day in the history of Crake Valley Croquet Club as a date representing the climax of our 125th Anniversary Year celebrations.

The special Club Day was transformed after lunch with a set of fun games testing croquet techniques, with the day’s highlight being the unveiling of the Commemorative Garden by our special guest, Liz Vaughan.

Before the unveiling, members and guests were welcomed by Club Chair, Simon Robins, who outlined the 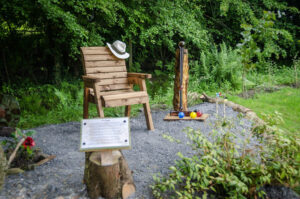 reasons for the Committee’s decision to commemorate anonymously all those who contributed to the Club but are no longer with us – the garden would be a celebration of their lives and love of croquet. The only name chosen for special mention in Simon’s introduction was that of Bob Vaughan who in the late 1980s and early 1990s had done a tremendous amount to save the Club from near collapse. It was fitting therefore that Liz Vaughan had agreed to inaugurate this commemorative space within the Club grounds.
Simon thanked all who helped preparing the Garden, but particularly Sandra Cornes who had developed the concept and created the stunning glasswork in the form of a croquet mallet and balls.

Members and guests were invited to charge their glasses and make their way to the garden where Liz Vaughan proposed a toast to the continued success of the Club, declaring the Commemorative Garden open by unveiling a plaque containing a poem which was read to all.

On returning to the marquee for improved acoustics, Liz gave a fascinating account of her time helping Bob at the Club, recalling some of the outrageous exploits such as the two 24-hour croquet sessions, still valid in the Guinness Book of Records, and mentioning many of the people involved.
After much pleasant reminiscing chat over a delicious buffet and more drinks, Simon thanked all who had helped in making the event such a success.
There was, however, one more surprise when Liz presented the Club with her own painting of the clubhouse and surrounds. This generous gift was admired by all and would soon be taking pride of place on the clubhouse wall.